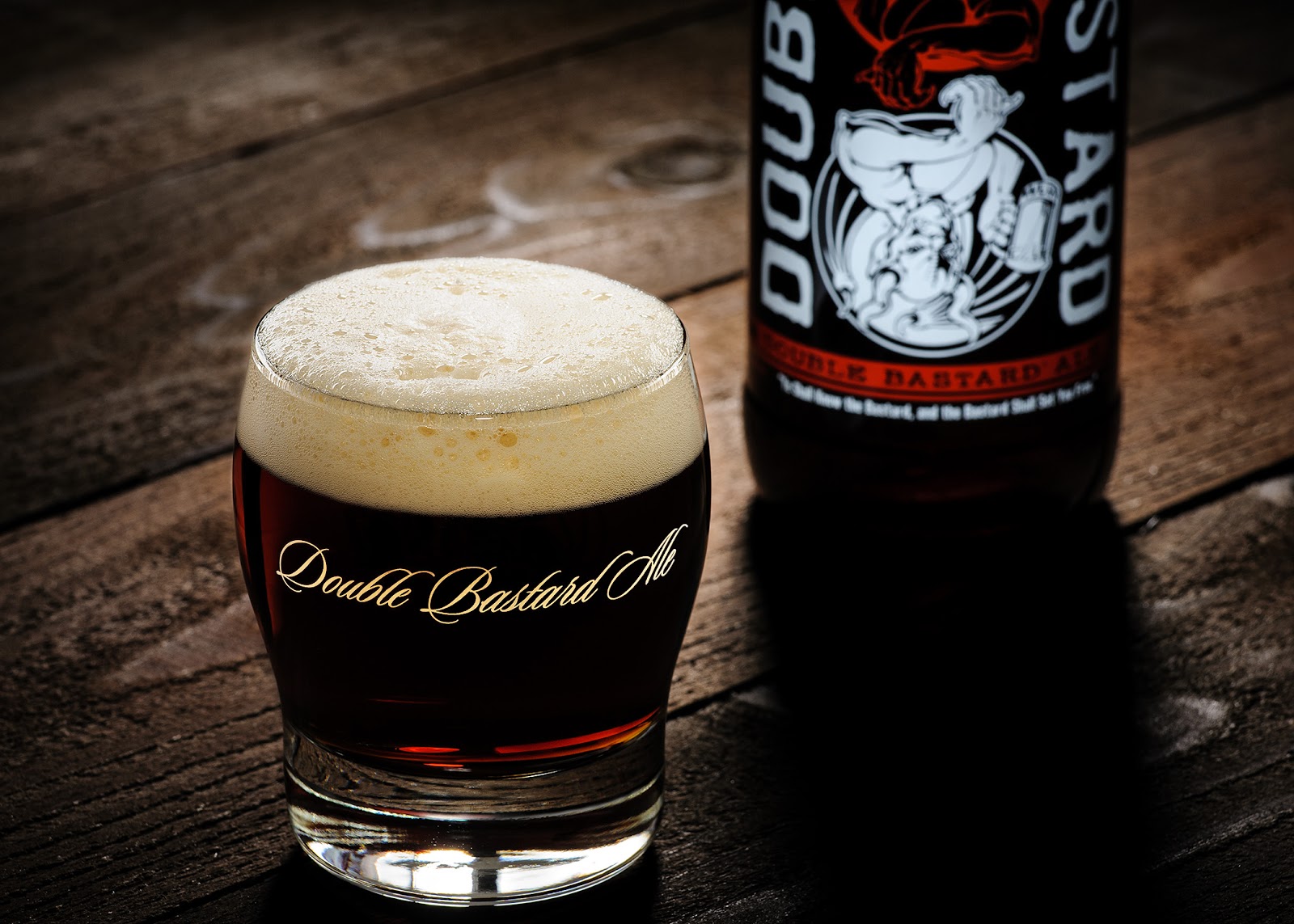 Double Bastard Ale is one of my favorite brews. It's a big, mean, decadent beer that lives up to it's bastard lineage. It's thick and creamy almost regal-like, yet aggressively hoppy which gives it that "rough around the edges" feel. Sort of like The Ramones at a black tie event. So with that in mind I will try to craft an image that captures Double Bastard's soul.

To represent the regalness of the brew I will use Stone's specialty glass. It has a classy look and reminiscent of a fancy whiskey glass. For the "rough around the edges feel" I will use a wooden surface. The point of interest will be the script lettering on the glass. 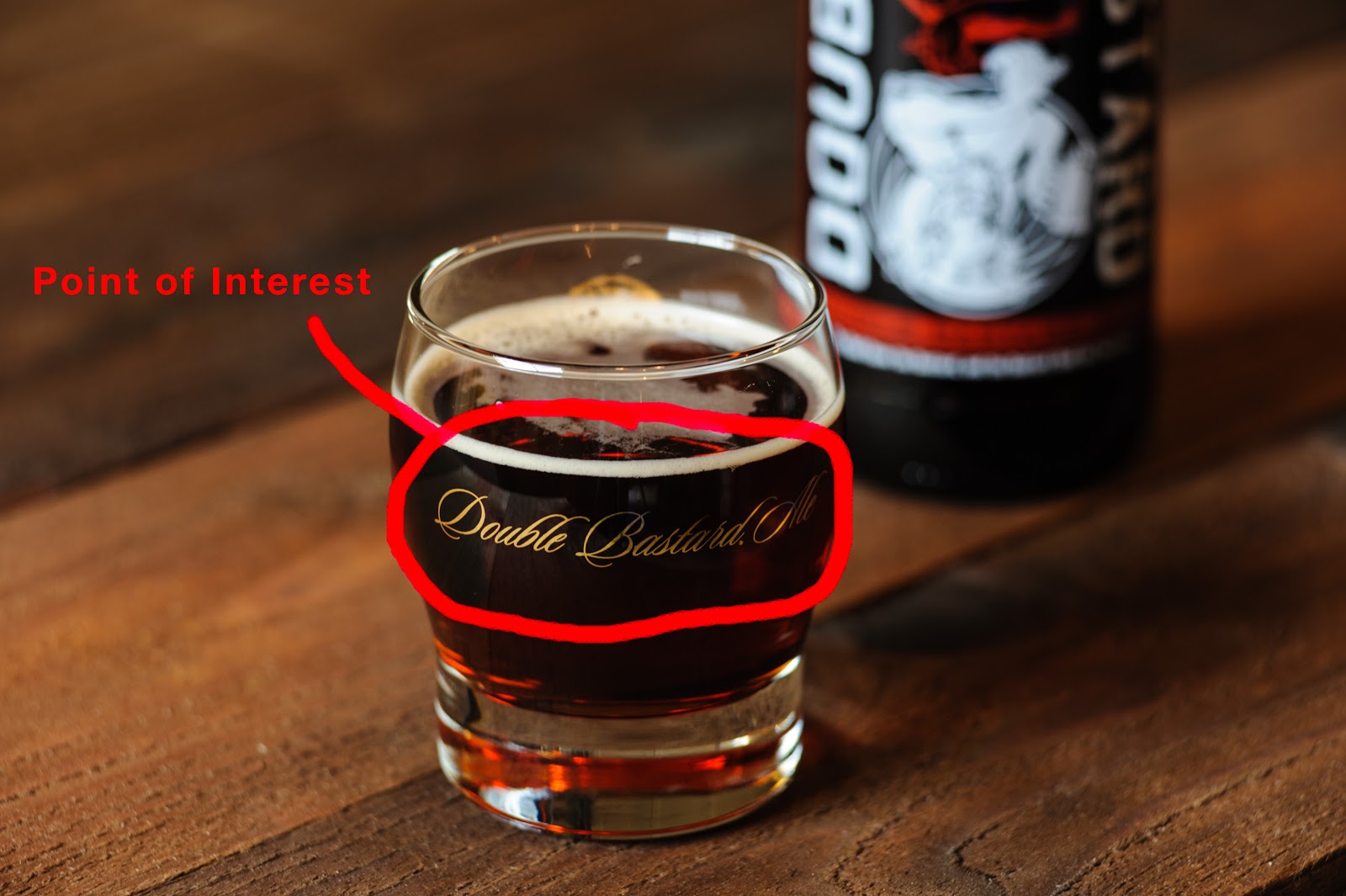 I set up my surface in order to create leading lines into the glass. These lines are a compositional tool that helps draw the viewer's eye along a path. 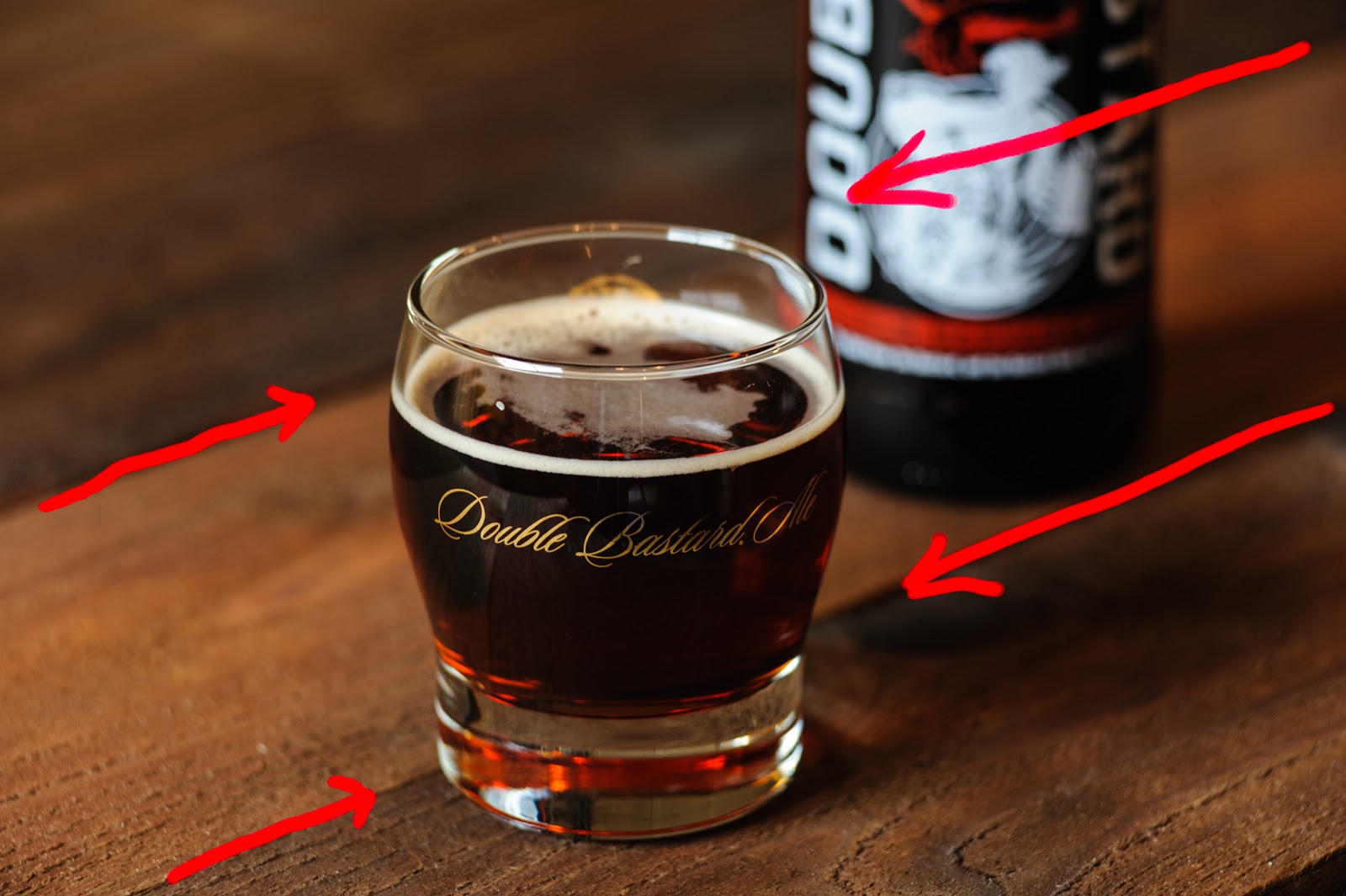 I use the rule of thirds to place the point of interest in the lower left intersection. If you're not familiar with the rule of thirds you can think of it like a tic-tac-toe grid. where you have two vertical and horizontal lines intersecting. These intersecting points are where you place your point of interest for a more natural and compelling composition. Once that's in place I move the bottle into the upper right intersection point. In the final image the glass is moved a wee bit to the left. 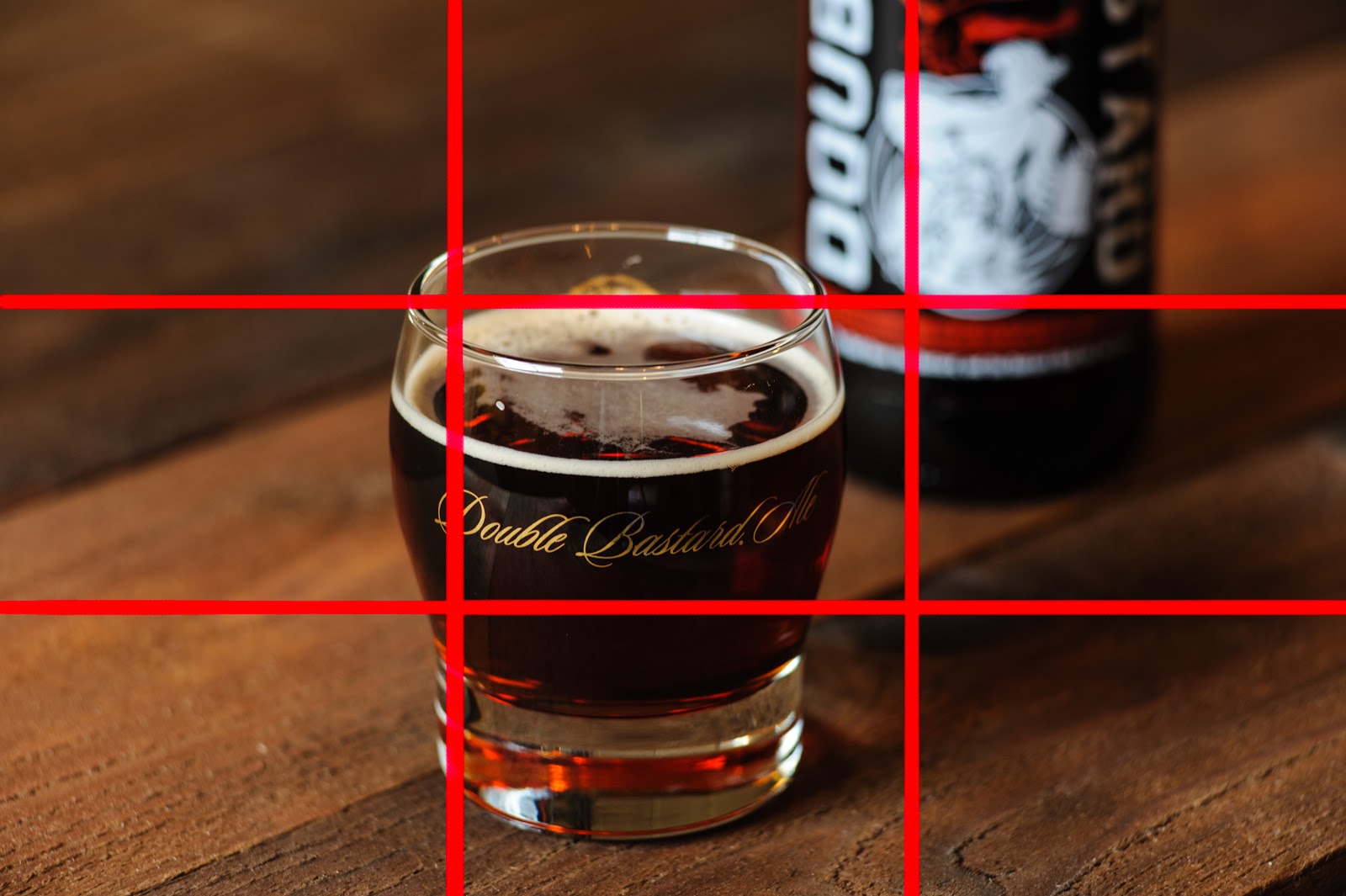 A test shot with ambient light reveals a glimpse at what the final image might look like. Issues I have with this are: 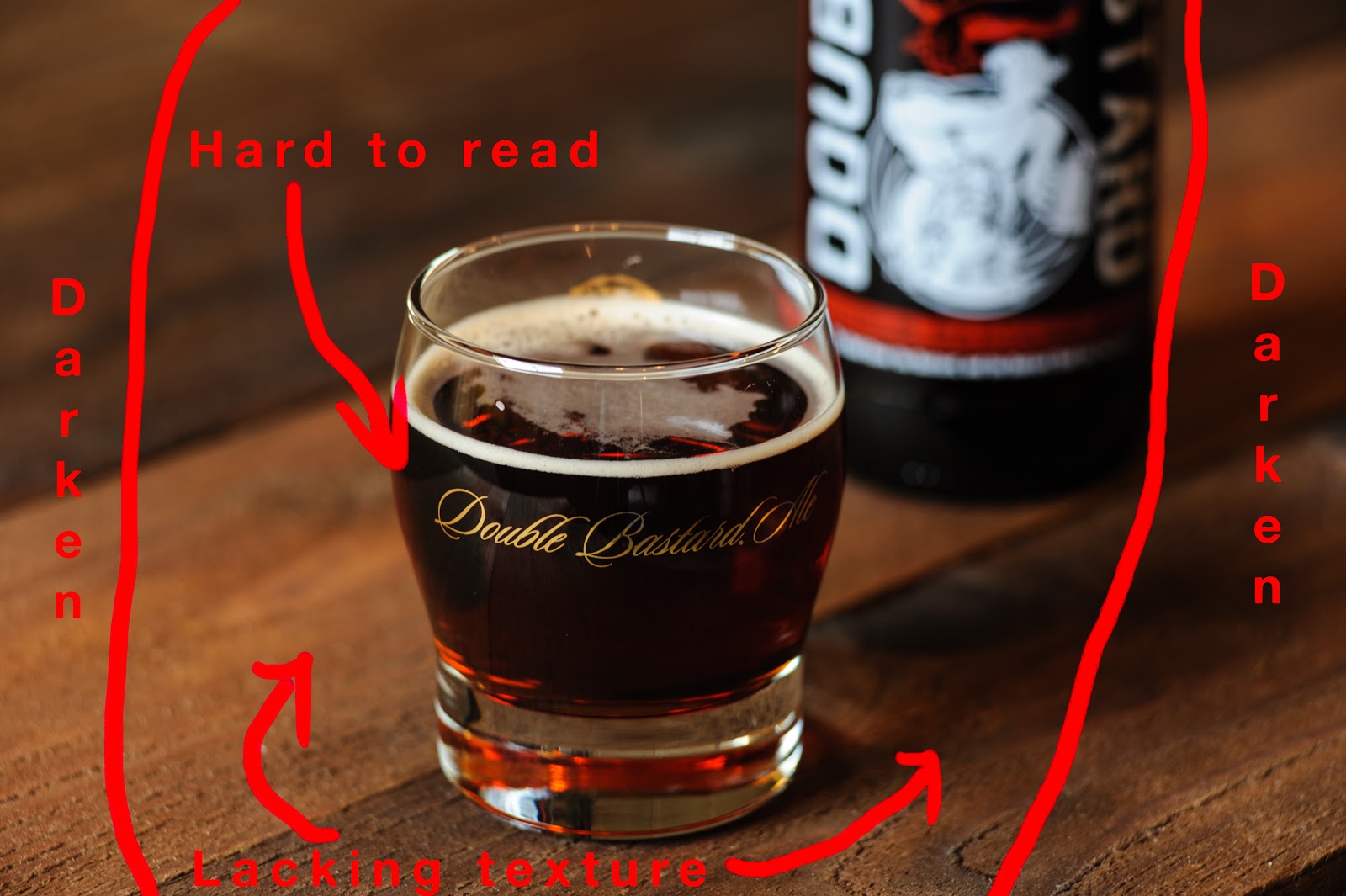 My first step in addressing these issues is to use a Back-light. This will define the edges of the subject and bring out the texture of the wood as well as darken the edges.

To do that I will use a studio flash with a grid. Grids reduce the beam spread produced by the flash and are available in varying degrees. I have 10, 20, 30 and 40 degree grids at my disposal. To figure out which grid to use I swap them out until I get the effect I want. Here's a series of shots so you can see this difference. 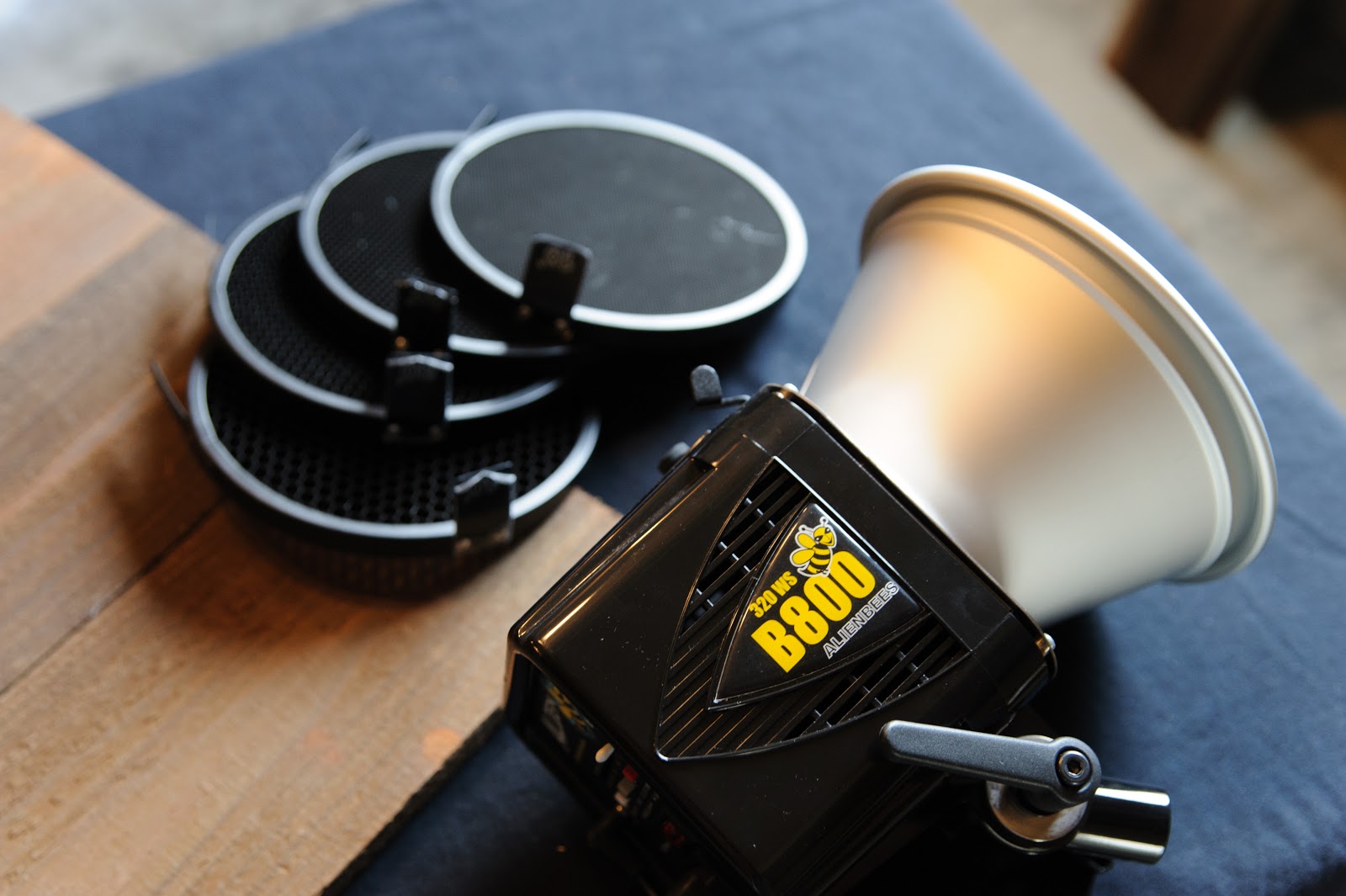 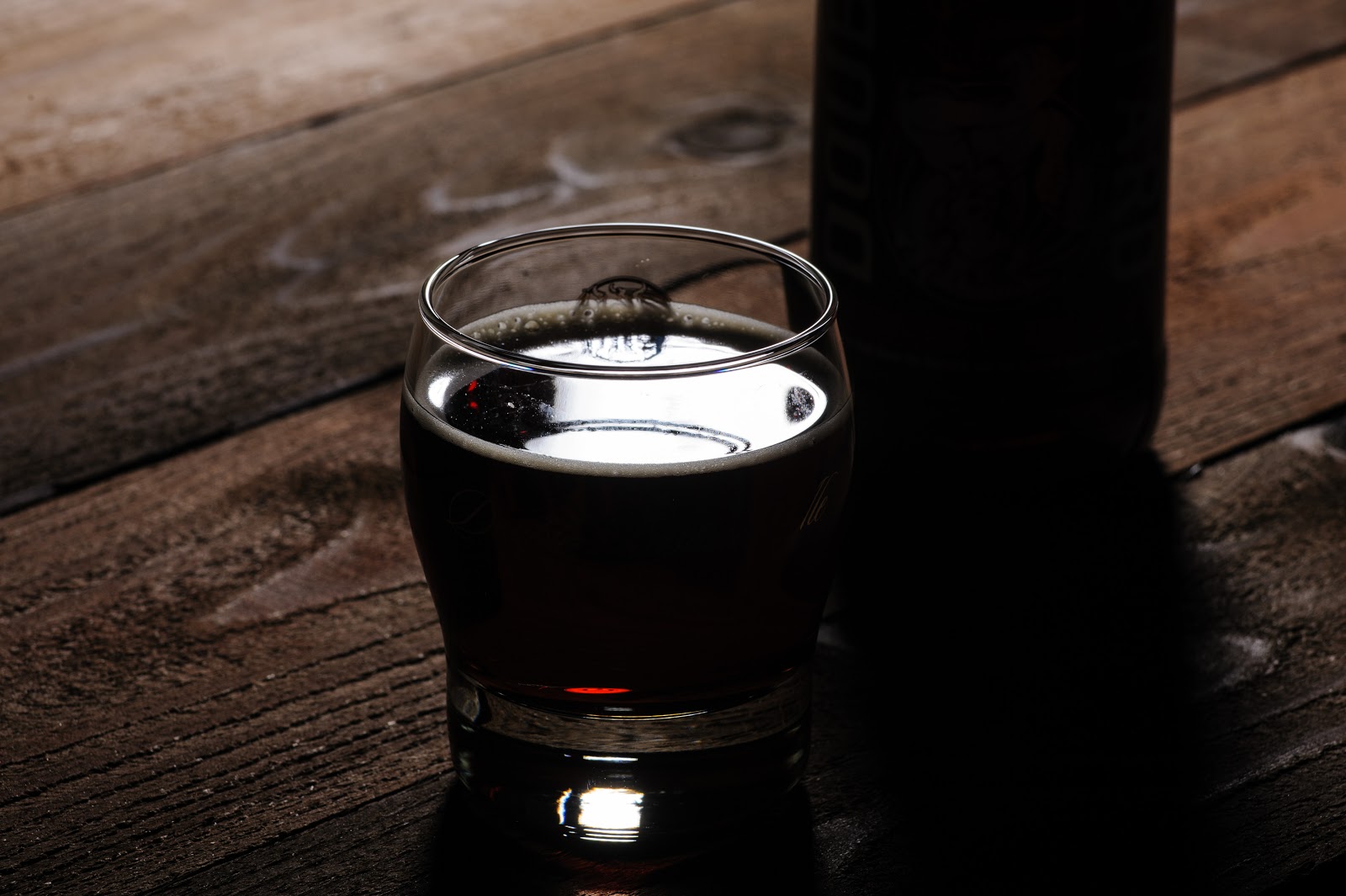 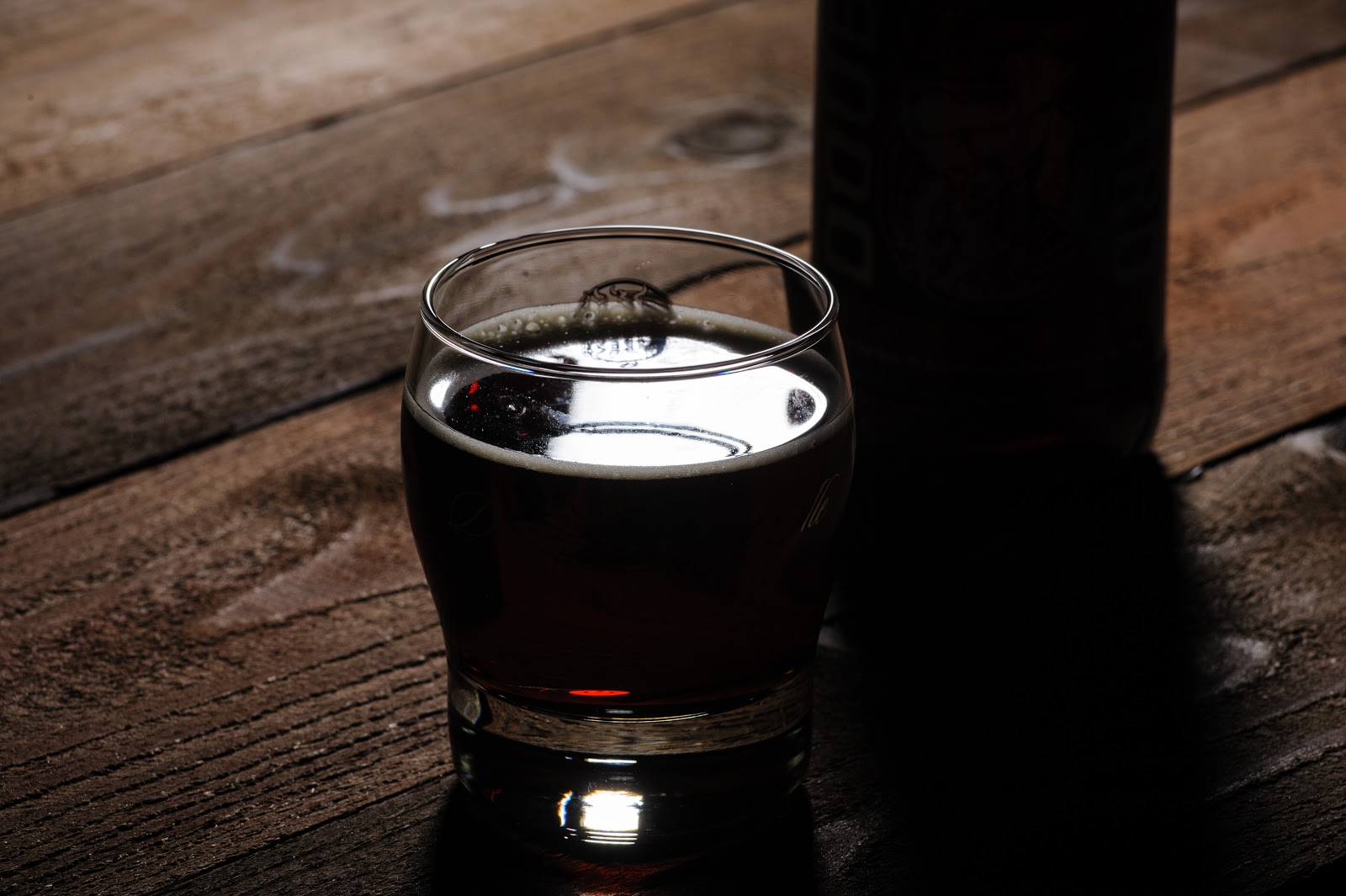 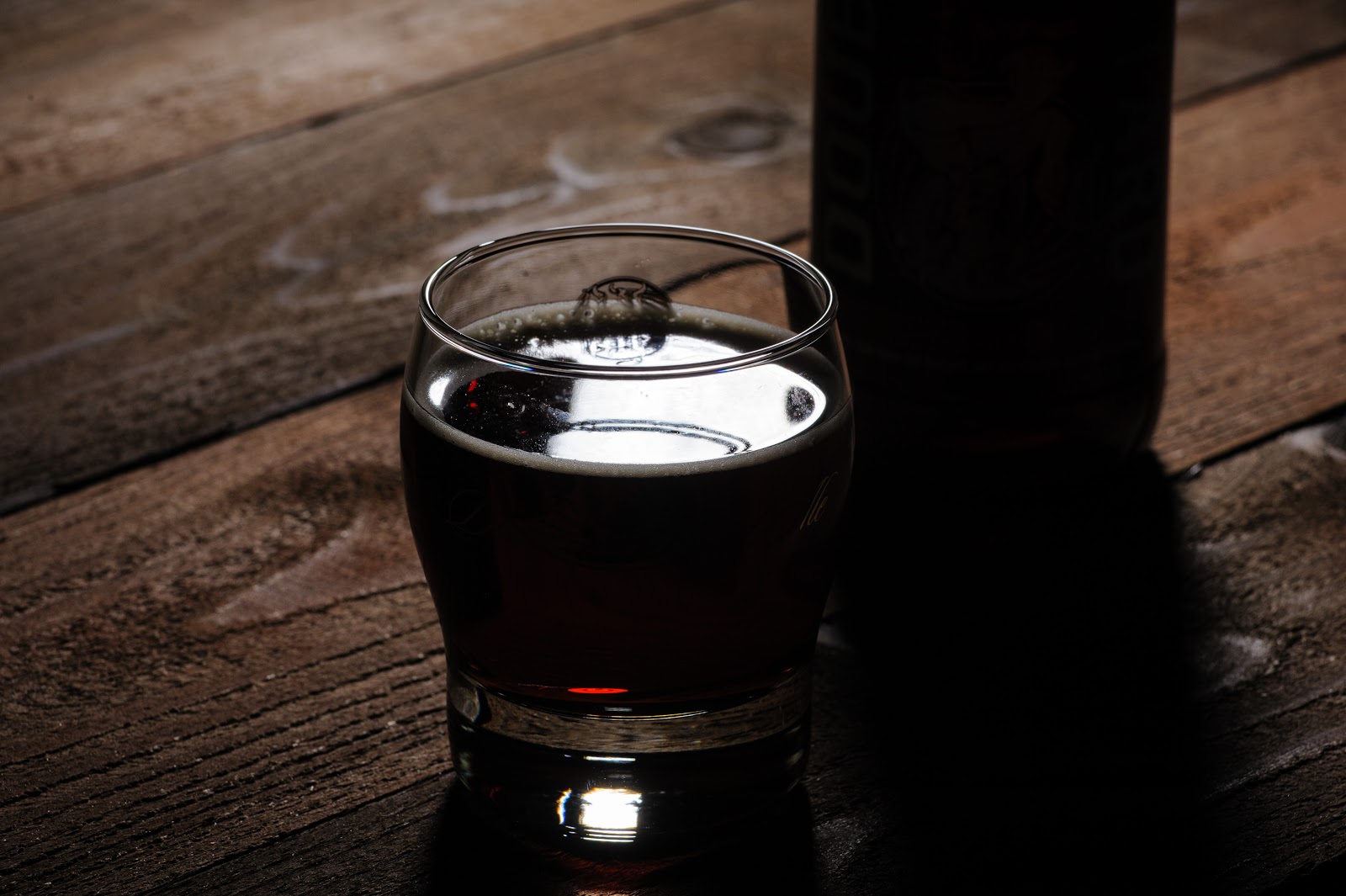 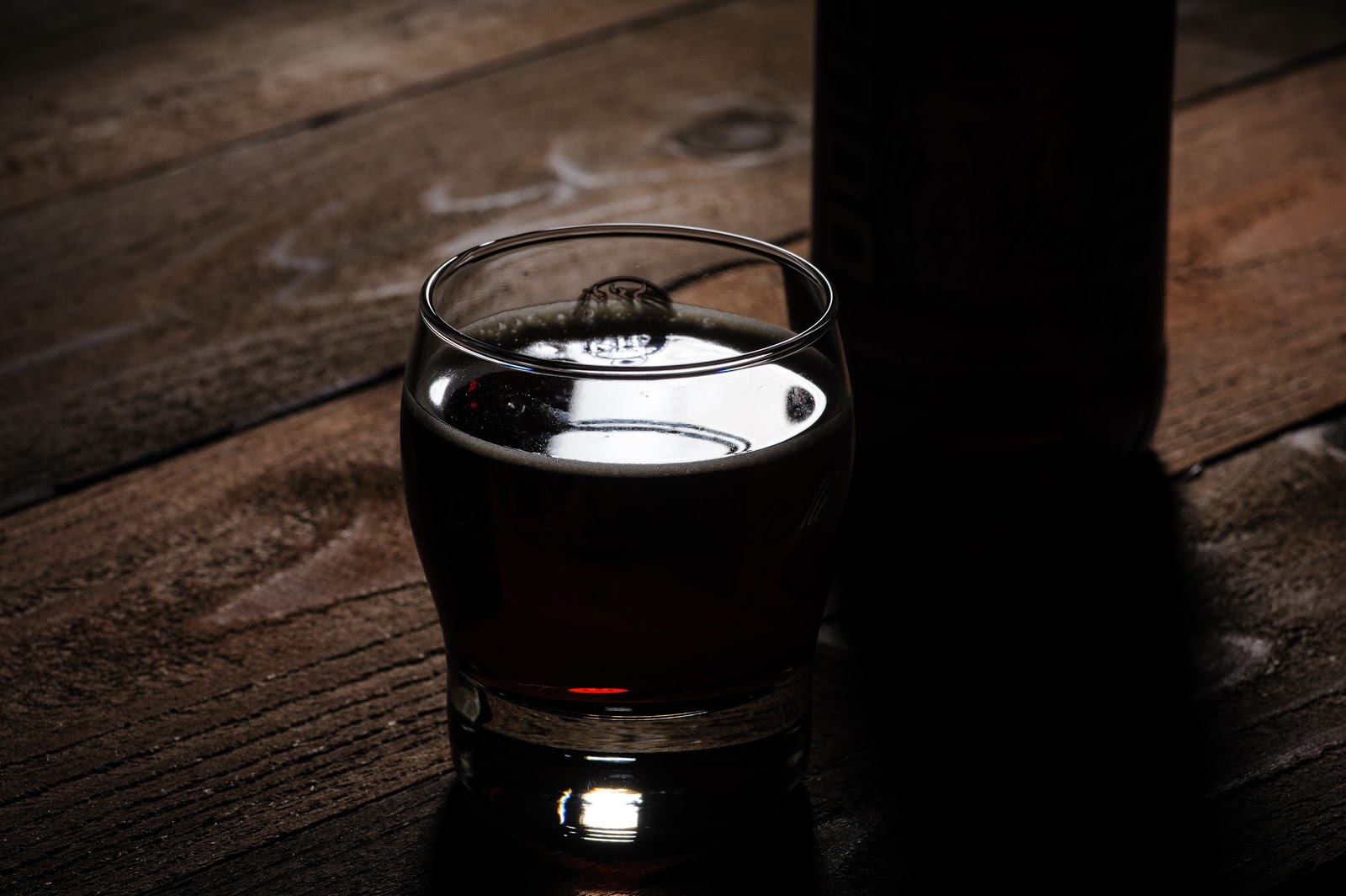 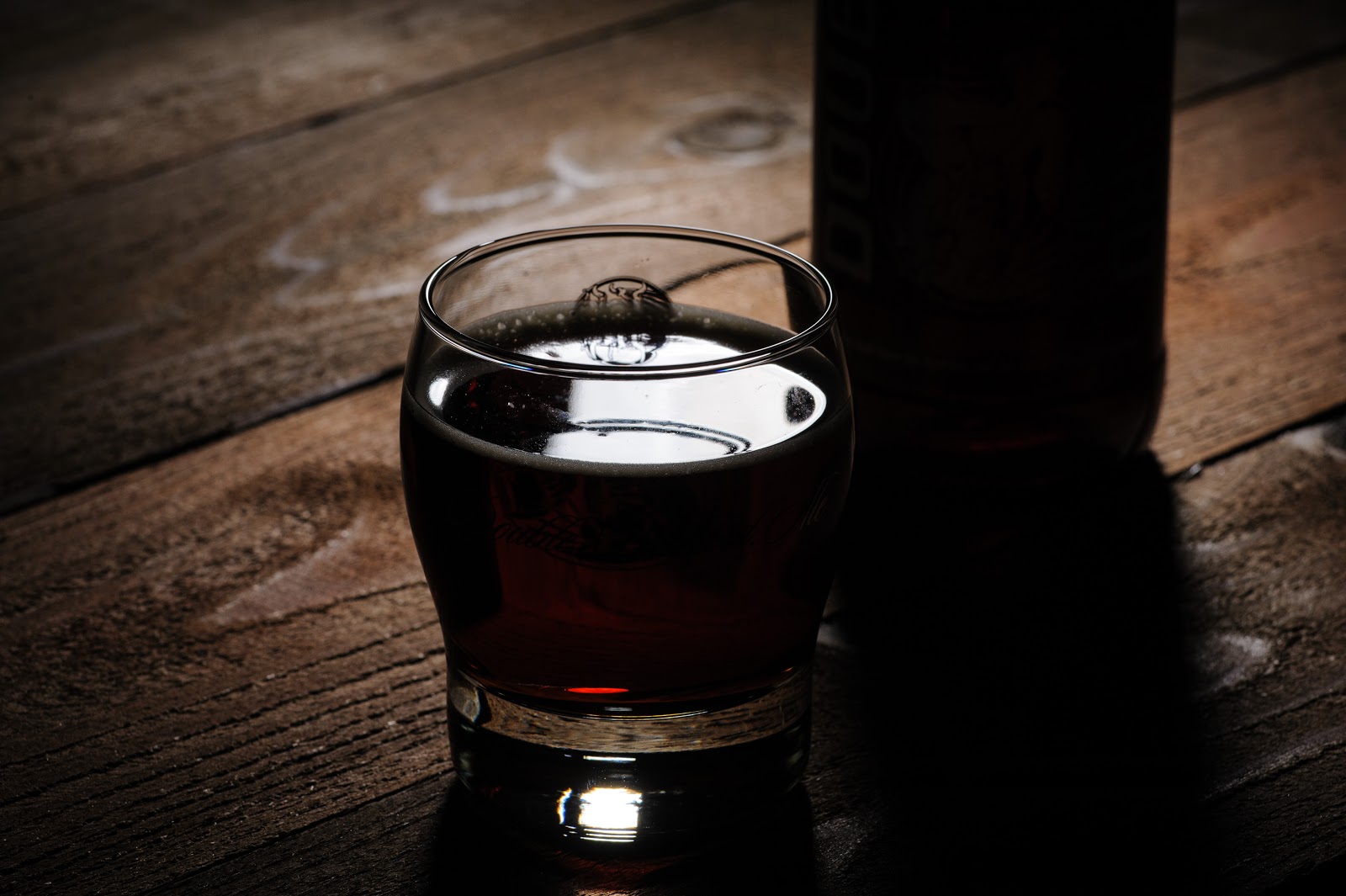 As you can see the edges darken with a smaller beam spread. I typically use a 10 degree grid due to the size of the objects I tend to shoot. The surface now has some shadows and highlights revealing the wood texture. The edges of the objects are well defined except for the right edge of the glass because the bottle is blocking the light. Next, I will use a Main-light to light the bottle and hopefully a little light spill will reveal the right edge of the glass. 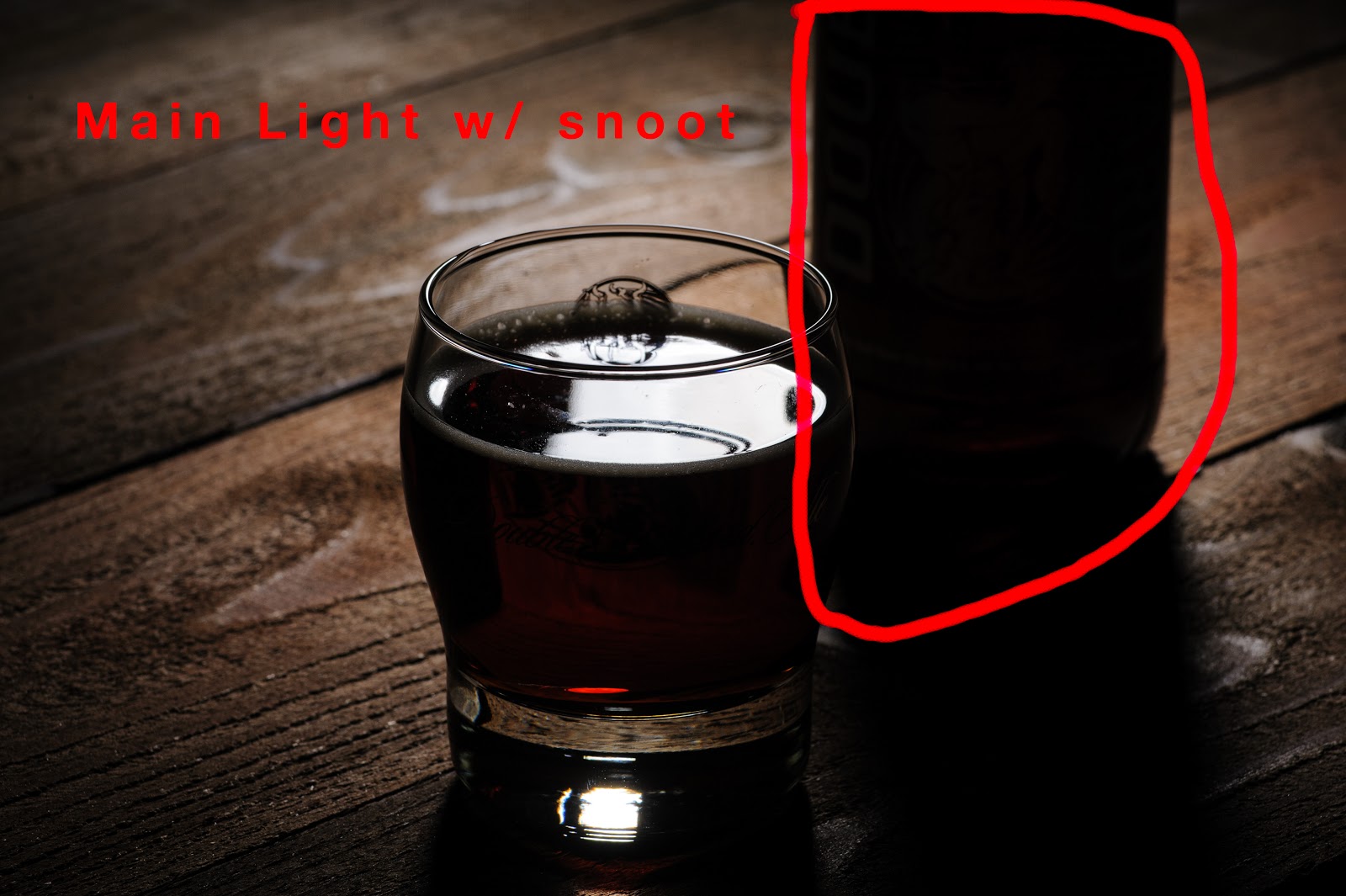 I use a 20 degree snoot on the Main-light. 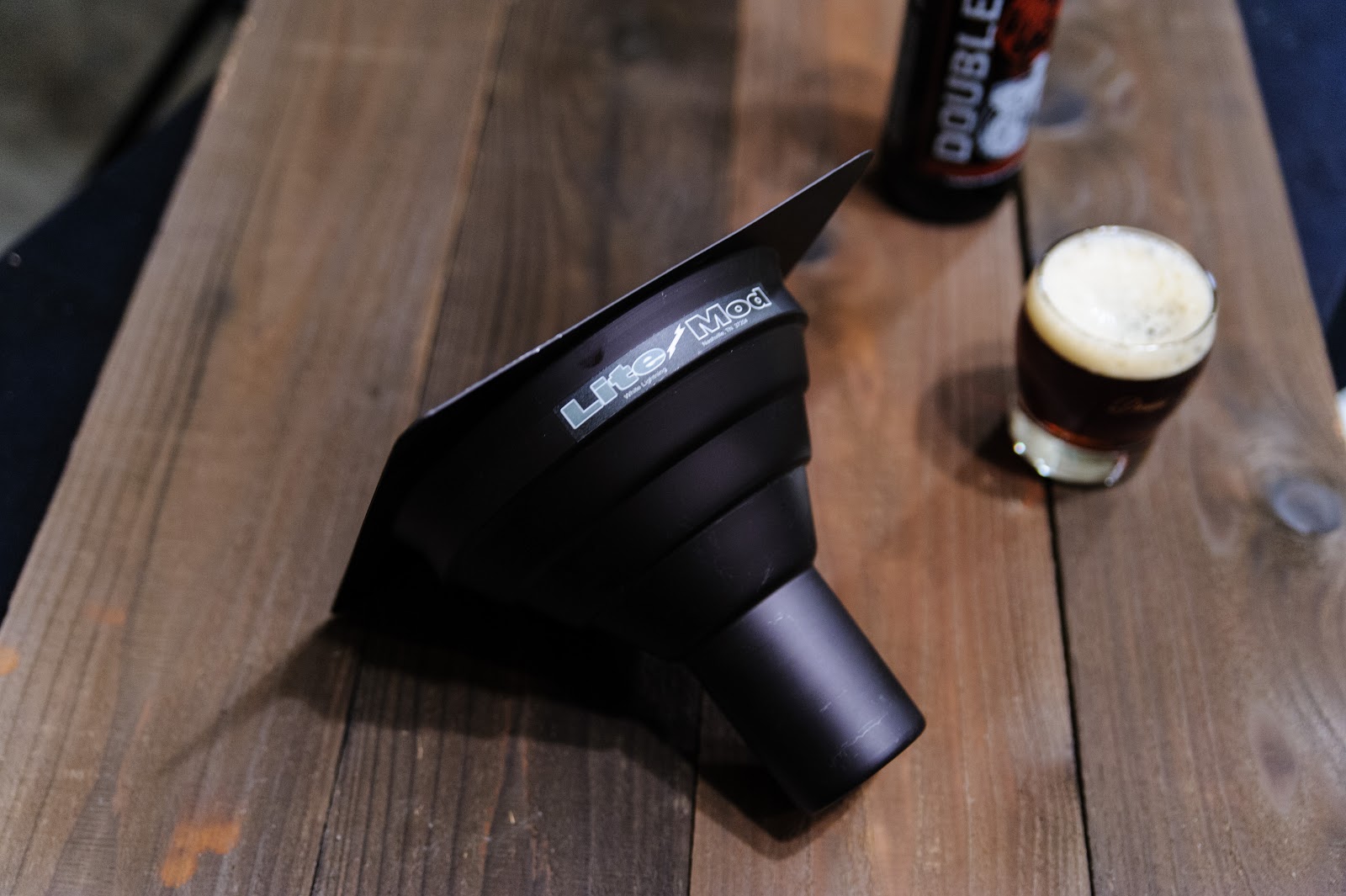 The Main-light w/ snoot illuminating the bottle and right edge of glass without adding too much light to the surface. On to the trickiest part of this shoot...lighting the point of interest. 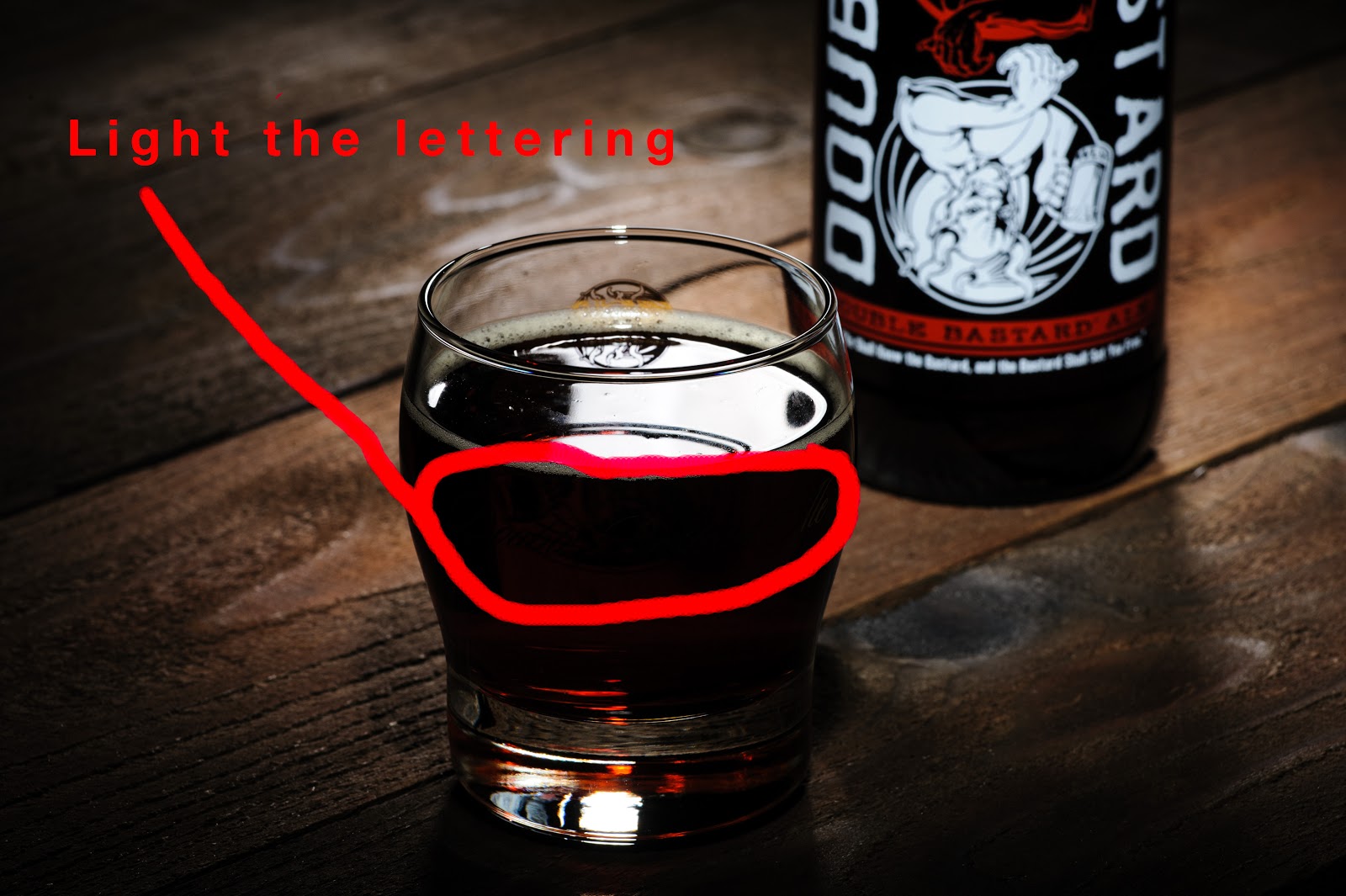 The reason this is so tricky is because the lettering is gold metallic...a highly reflective surface. I shoot objects like this by placing the light source behind the object and bouncing light back into it with a white card. I use 10"x30" softboxes on both sides of the Back-light. The softboxes gives me a nice, soft light with good distribution. The white card is 24"x36" and I place it next to the glass. 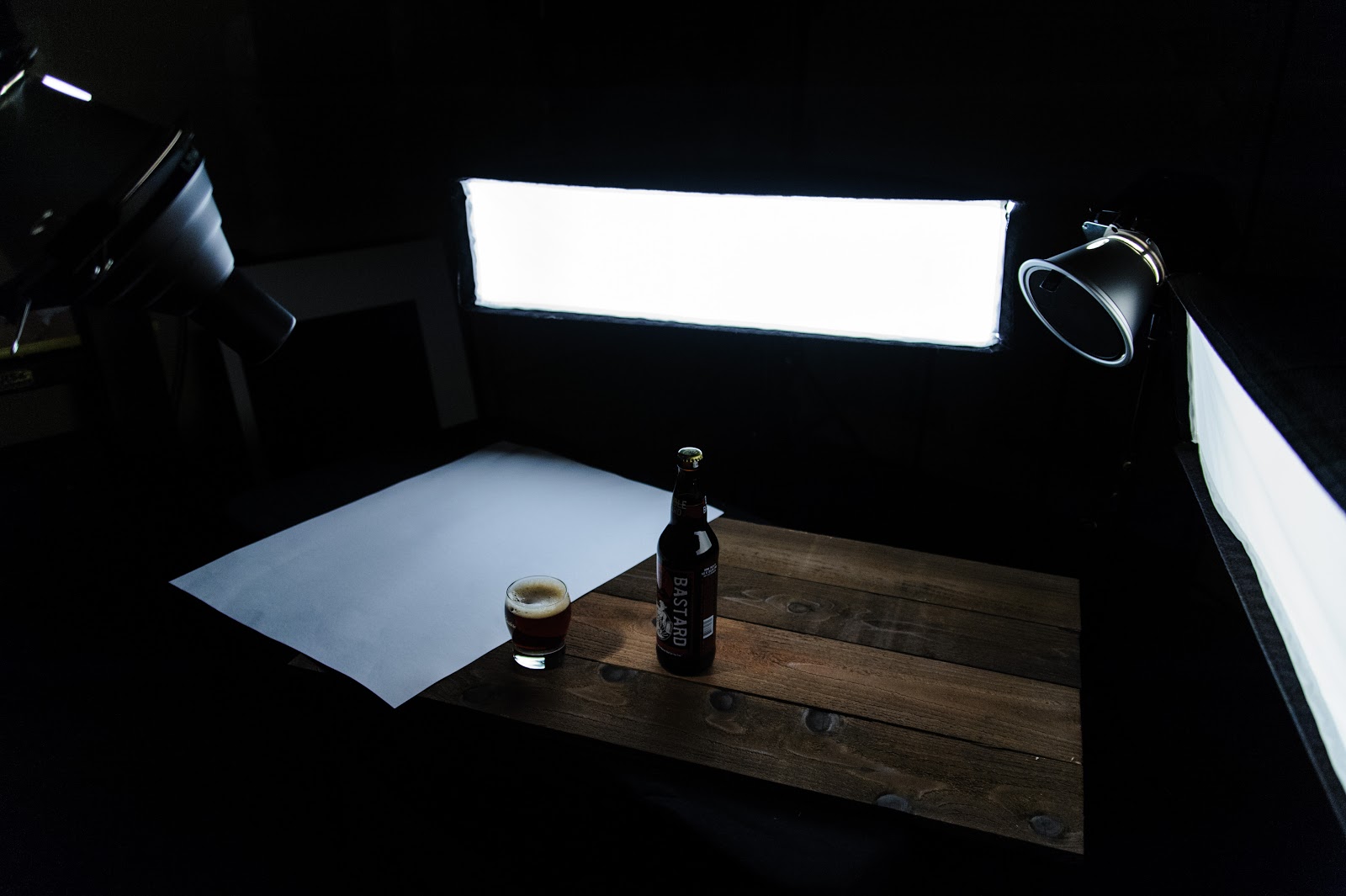 This technique does a good job of evenly lighting that pesky metallic lettering. Unfortunately it doesn't light up all of the lettering so I will move the card and take another exposure. A total of four images were taken and will be composited in Photoshop during post. 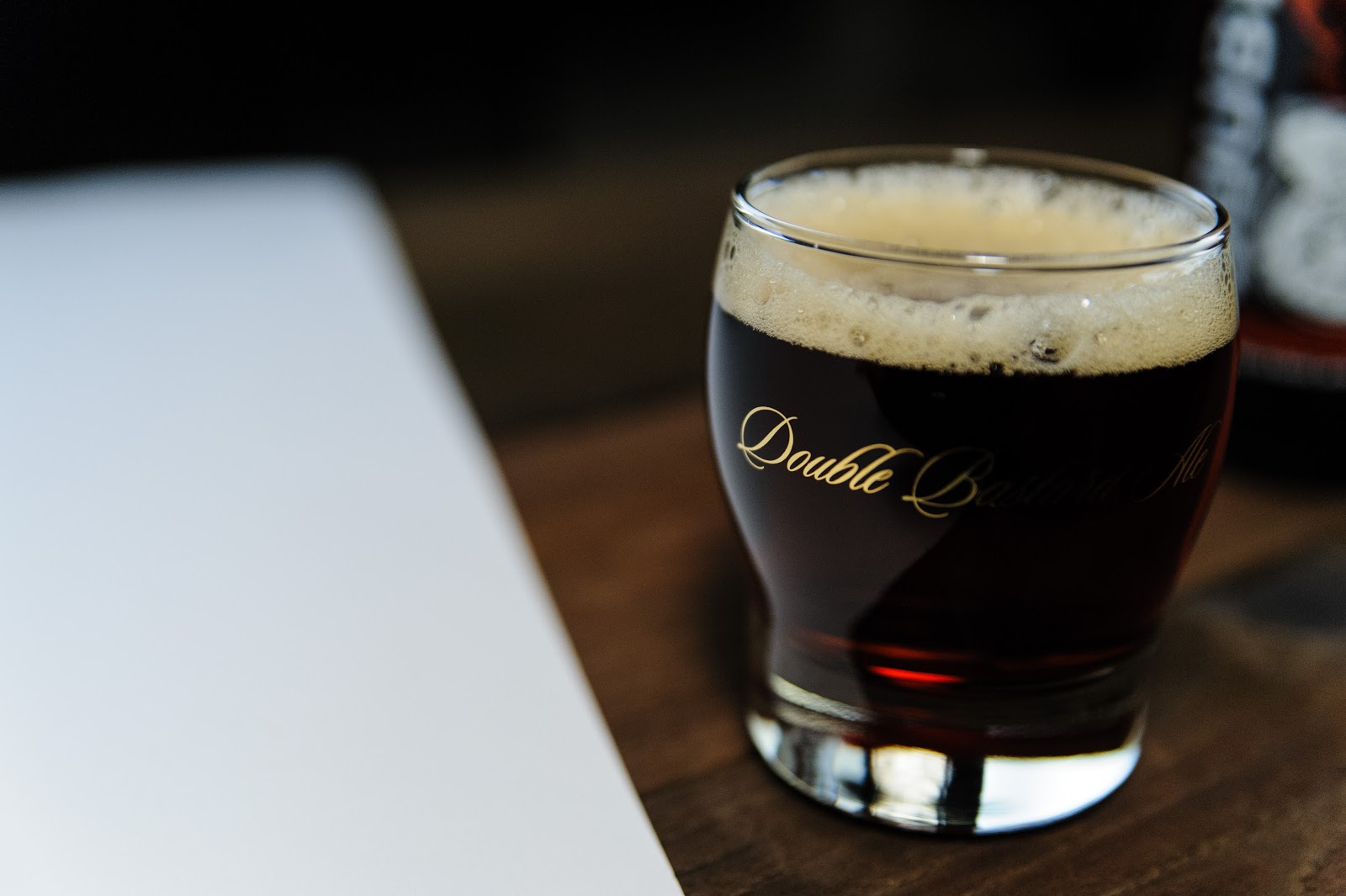 On to the beer glow. Typically I would hide a small white card behind the glass to bounce some light through it. In this case, I didn't use a white card because it bounced too much light through the beer and revealed the gargoyles on the other side of the glass. This competes with the point of interest so to combat this I decided to keep the beer dark enough to hide the gargoyles. 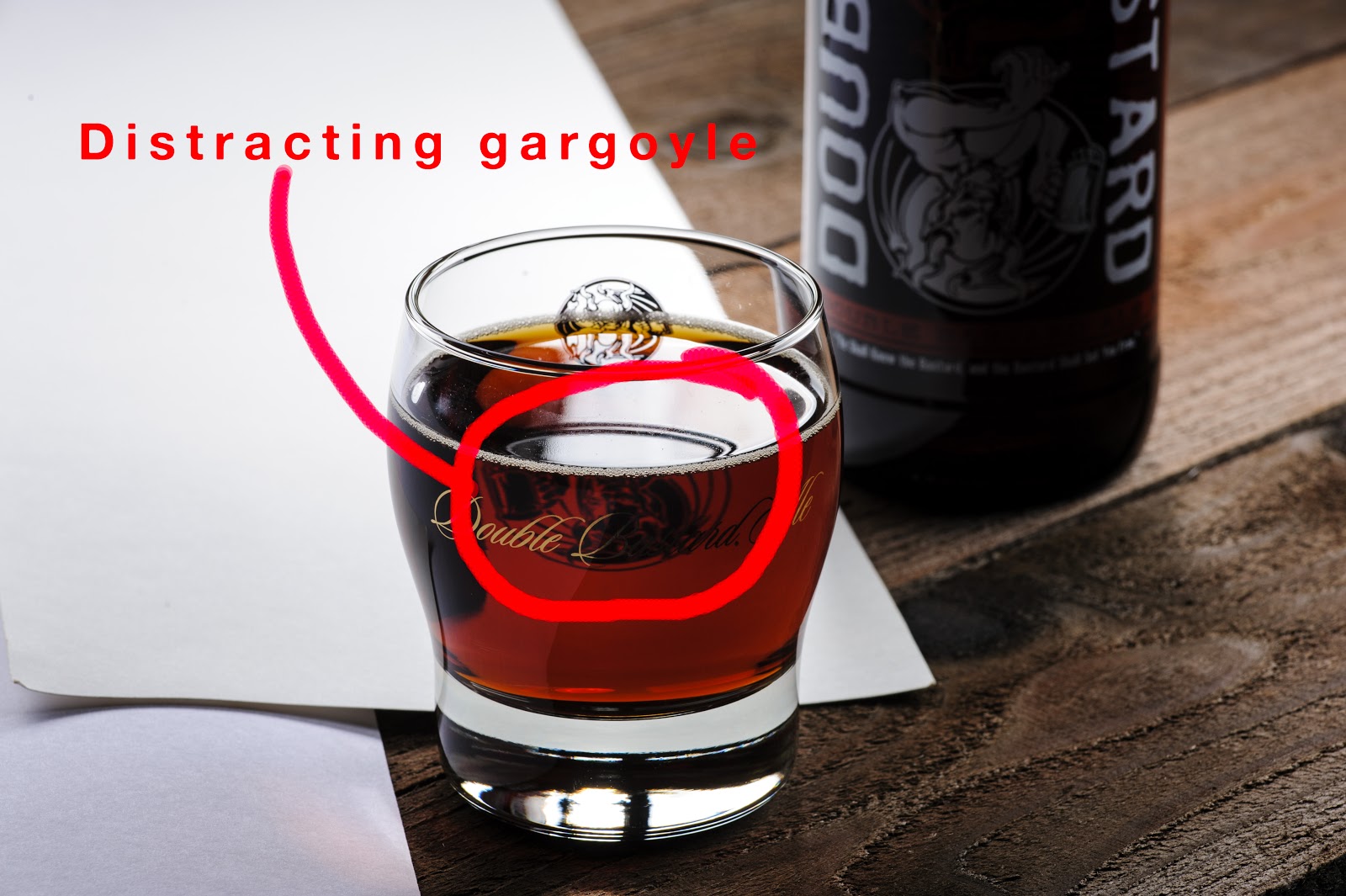 I used a small piece of diffusion material which bounced less light through the beer keeping it dark, yet providing streaks of light along the bottom and left edge of the glass. That gives the beer glow a bit of mystery and class. 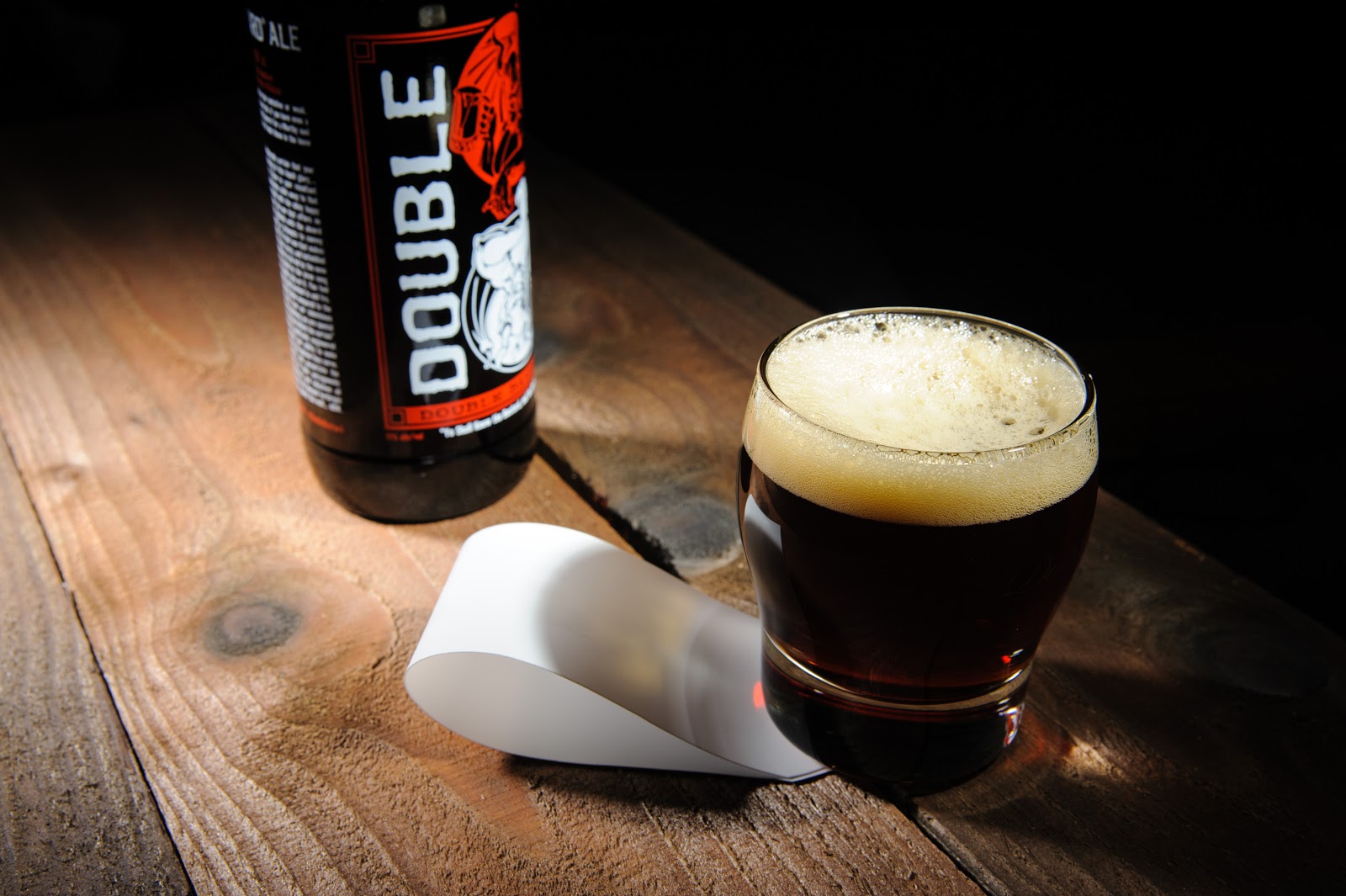 So, after hours of setup, tweaks and problem solving I'm ready to shoot this Bastard! The final step before I take a series of exposures is to generate the beer head. I've tried different methods with varying degrees of success and this is my favorite because it's easy and controllable. I use an oxygen aeration system that I use for homebrewing. 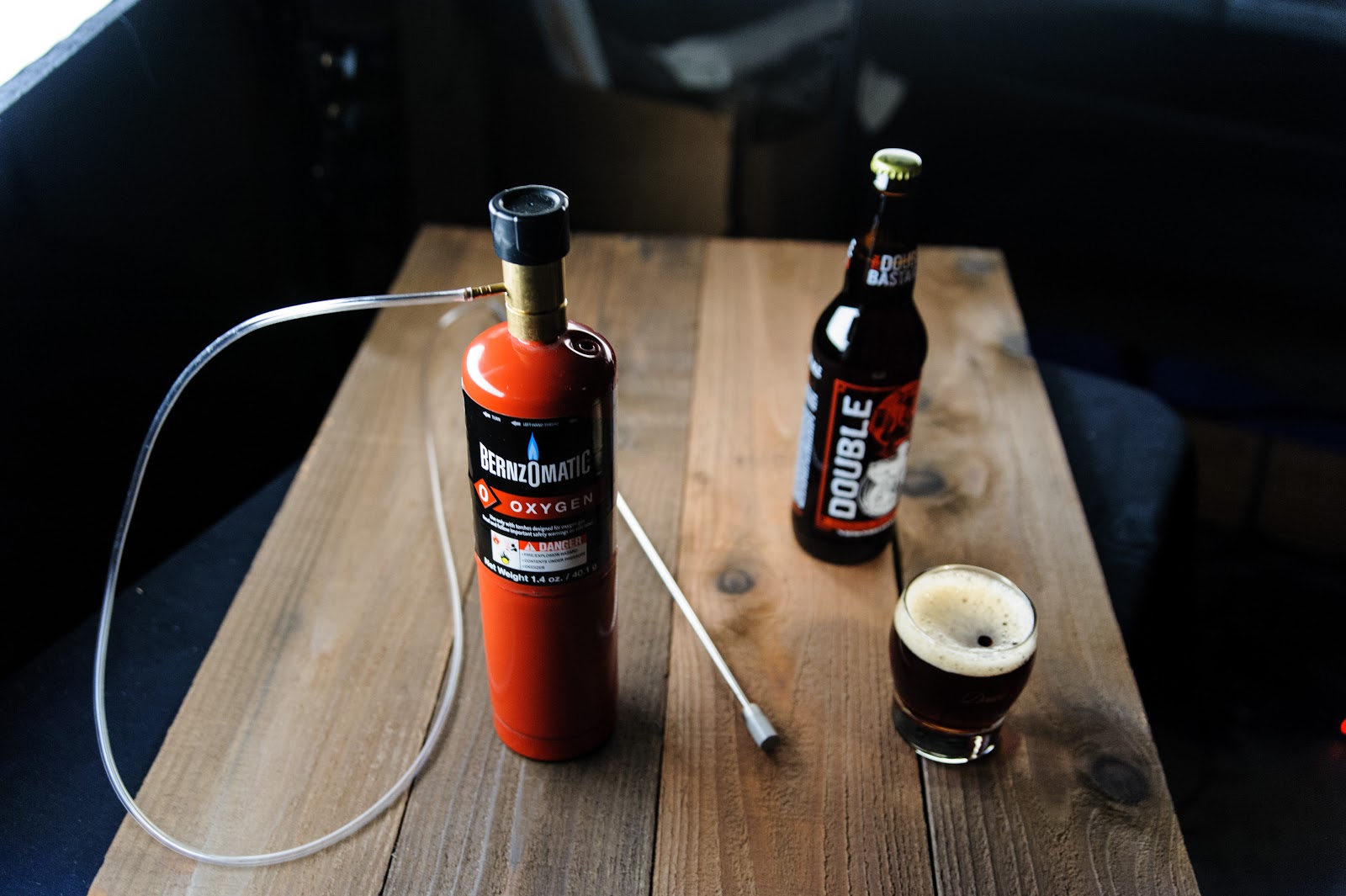 Insert wand and slowly turn on oxygen. Once you reach the desired level turn off oxygen and remove wand...ta-freakin'-da! 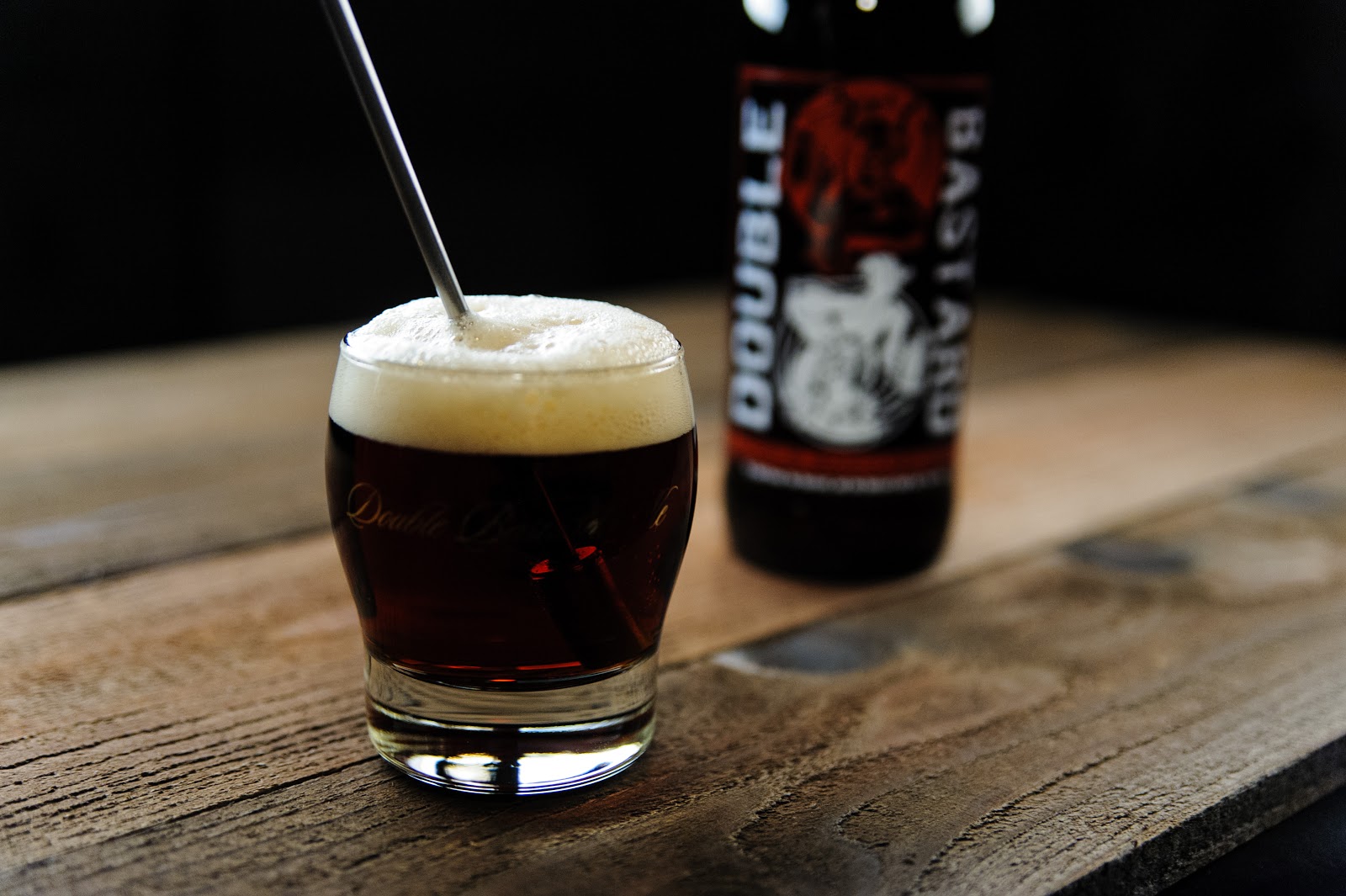 I took a series of exposures starting with the Back-light, then adding the Main-light, then the softboxes w/ white card. The final image is a composite made up of 6 images:

Raw adjustments made with Lightroom, compositing done with Photoshop and image enhancements done with the Nik Collection from Google.

Lesson learned: next time use more white cards so I can capture the lettering in one shot.

Email ThisBlogThis!Share to TwitterShare to FacebookShare to Pinterest
Labels: Behind-The-Scenes